Gale goes down a storm on debut 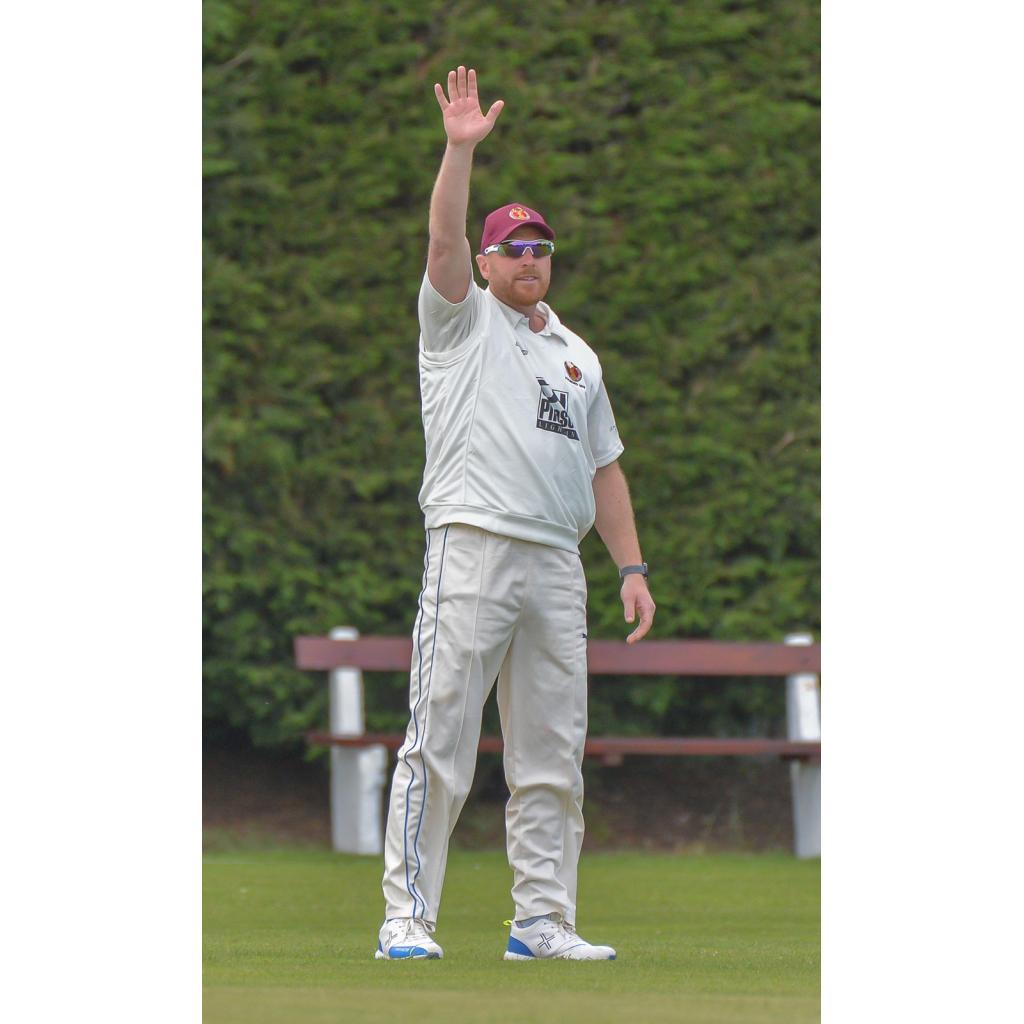 Premier Division
New Farnley v Townville
Leaders New Farnley survived some nervy moments before recording a three-wicket win in a low-scoring encounter at the Barry Jackson Ground.
It looked as if they were on their way to a comfortable win when they dismissed Townville for 105 with Mark Lawson taking 3-19 and Alex Lilley (3-24). Opener Jonny Booth (35) was the only batsman to get going.
Opener Aidan Langley (38) gave the New Farnley innings a positive start, but the complexion of the game changer dramatically once Townville skipper Jack Hughes introduced himself to the attack with his left arm spin.
Hughes immediately posed problems and took 7-28 as New Farnley’s innings began to unravel. In the end they were indebted to Dan Hodgson (22no) for seeing them to victory.
Scorecard
Pudsey St Lawrence v Woodlands
Champions Woodlands reduced the gap between themselves and leaders New Farnley to 14 points as they defeated St Lawrence by 110-runs to bag a maximum 20 points.
Opener Sam Frankland (46) and Tim Jackson (43) built a firm foundation on which Tom Clee (68) and skipper Brad Schmulian (48) capitalised as a total of 273-8 was posted. Opening bowler Charlie Parker’s perseverance brought him figures of 5-75.
St Lawrence were soon in trouble when they batted with Elliot Richardson claiming the wickets of Mark Robertshaw and Charlie Best. Josh Priestley (34), Archie Scott (34) and Luke Patel (32) all got starts but were unable to go on and make the significant contribution their side needed. Off spinner Kex Ahmed was the most successful bowler with 3-24.
Scorecard
Batley v Farsley
Bottom team Batley recorded their first win of the season as they defeat Farsley by seven wickets. Yasir Ali hit an unbeaten 83 and opener Nikash Khan (59) as they eased past the visitors’ total of 170.
Dan Revis (50) and Jonathan Read (40) were the top scorers for Farsley who were dismissed for 170 when they batted first. Raza Hassan was the pick of the bowlers with 4-41 as Batley secured which will give them a well-deserved boost and takes them within a point of Cleckheaton.
Scorecard

Hartshead Moor v Northowram Fields
Former Yorkshire captain and coach Andrew Gale returned to cricketing action with a century on his debut for bottom team Hartshead Moor as they defeated a Northowram Fields side that started the day as leaders by 57 runs.
Gale made 116, an innings containing three sixes and 10 fours, which enabled Hartshead Moor to make 285-7, their highest score of the season. After skipper Chris Wynd had made 32 at the start of the innings Gale took centre stage. The left hander was joined in a third wicket stand of 142 by Hasnat Yousaf (69) as Sam Gardner (3-78) posed the main threat.
Young paceman Josh Marsden (5-42) and off spinner Lewis Lomax (3-65) ensured Gale made a winning start as Northowram Fields, despite 67 from Ben Grech and 42 by Richard Gould, were bowled out for 22.
Scorecard
Wakefield St Michael’s v Sandal
Sandal are the new leaders of Division Two after continuing their run of good form with a 130-run win in their local derby clash at Wakefield St Michael’s.
Skipper Kristian Shuttleworth (55), Leighton Shuttleworth (49), Matthew Westwood (49) and Ashley Mackereth (33), helped them build a total of 268-8 despite the efforts of Joe Finnigan (4-53). Overseas player Lalit Mangalarapu (45) top scored as St Michael’s were bowled out for 138. Brandon Hewlett (3-33) and Zaeem Zulfqar (3-11) were the best of the bowlers.
Scorecard
Yeadon v Crossflatts
Centuries from Sri Lankan Pasindu Thirimadura (126) and Gareth Lee (100) powered Yeadon to an eight-wicket win which has lifted them to third in the promotion race.
Thirimadura struck two sixes and 17 fours while Lee picked up 13 fours as they shared an opening stand of 210 which provided the impetus for their side to chase down a challenging Crossflatts score of 272-6.
South African Ruan Van Rooyen impressed again for Crossflatts with 94 while opener Joe Hicks (64) continued his good form, but their efforts were not enough to stave off a defeat which leaves their side sitting in 11th place and in danger of relegation.
Scorecard
Lightcliffe v Buttershaw St Paul’s
Amer Ayoub took 5-38 as Buttershaw St Paul’s inflicted a third straight league defeat on a Lightcliffe side that has dropped to fourth place.
Lightcliffe were all out for 133 to lose by 69 runs to a St Paul’s side that scored 202-8 in their innings. Paul Carroll (35no), Jonathan Burston (33) and Ayoub (31) led the way while Rob Burton (3-50) and Peter Dobson (3-61) were the best of the home bowlers.
Scorecard
Great Preston v Hopton Mills
Chris Scott (59) and Sohail Hussain (39) enabled Hopton Mills to overhaul a Great Preston total of 236 to record a four-wicket win.
Oliver Newton (50), Sam Wright (47) and David Illingworth (46) provided the bulk of Great Preston’s runs as Sohail Hussain (4-46) and Usman Maqsood (3-62) posed the main threat.
Scorecard
Hunslet Nelson v Bowling Old Lane
Will Stiff (3-19) and Sam Thewlis (3-42) enabled Hunslet Nelson to dismiss Bowling Old Lane for 147 and secure a 35-run win. Farhan Hussain (45) top scored for the visitors.
Muhammad Iqbal (37) and Stiff (34) helped Nelson to 182-9 in the face of good bowling from Saad Khan (5-45).
Scorecard
Division Two Stats of the day
Top team total: 285-Hartshead Moor v Northowram Fields
Top individual score: 126 Pasindu Thirimadura (Yeadon v Crossflatts)
Best Bowling figures: 5-38 Amer Ayoub (Buttershaw St Paul’s v Lightcliffe)
Division Two Stats of the season
Top team total: 353-4 Buttershaw St Paul's v Northowram Fields
Top individual score: 139 Kurt Chalker (Hunslet Nelson v Hopton Mills)
Best Bowling figures: 6-30 Umar Abbas (Hopton Mills v Bowling Old Lane)
Division Three
Liversedge v Rodley
Liversedge have a commanding 42 points lead in Division Three after an emphatic nine-wicket victory over lowly Rodley. Openers Imran Dawood (49no) and Parvaise Khan (41) continued their recent good form as Rodley’s disappointing total of 128 was chased down.
Khan was also in good form with the ball as he returned figures of 4-33 as Rodley were made to struggle. Gary Sagar (39) provided the only significant contribution.
Scorecard
Gildersome & Farnley Hill v Adwalton
Second place Adwalton had James Colbourn (5-18) to thank as they bowled out Gildersome & Farnley Hill for 143 to complete an 82-run win. Gethin Clarke (36) top scored for the home side.
Adwalton’s total of 225-7 owed much to the efforts of Chris Bishop-West 56 and Matty Lyles (37)
Scorecard