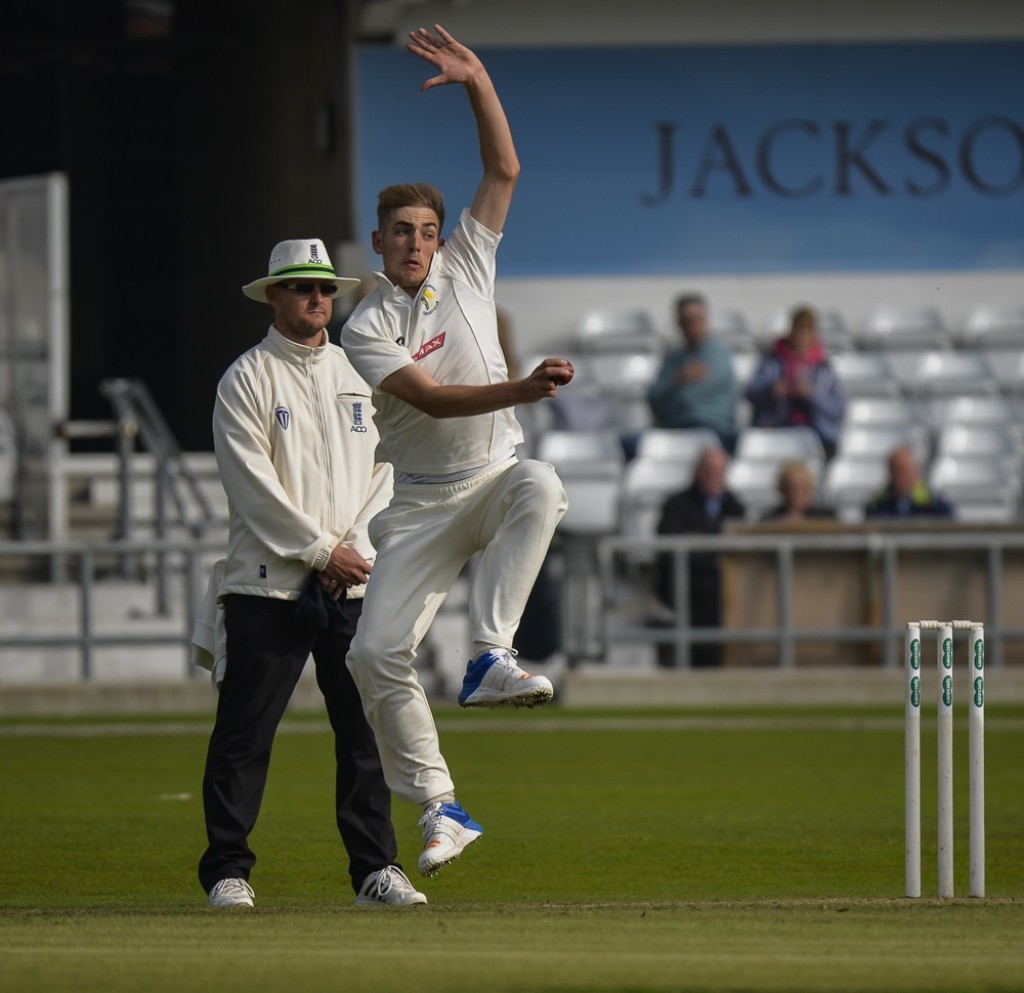 Methley have powered into a ten-point lead in the Premier Division after amassing 342-7 against Ossett, and it was young bloods Jason Marshall (164) and Eitan Litvin (87) who did most of the damage.

Ossett made a fair stab of it, finishing just 10 runs short after skipper Nick Connolly scored 121. However, the returning Gloucestershire paceman Jared Warner, top picture, did most to stifle the Ossett charge with 4-57.

New Farnley are second after a regulation ten wicket victory at Cleckheaton. Liam Guthrie (4-44) and the consistent left arm spinner Gurman Randhawa (4-20) were too good for Cleck, while openers Aidan Langley and Lee Goddard knocked off the 137 target with little fuss.

Townville’s dodgy start to the season ended with a 180-run victory over much fancied Bradford & Bingley. From 28-4, Townville revived somewhat to reach 294-7 with Jonny Booth in ominous form scoring 141 not out. Yorkshire’s Ben Coad took 3-29 for a Townville side who were not going to fail to defend such a total.

The one shining beacon for Bingley was skipper Ed Brown’s innings of 70 not out.Townville will be buoyed by their new signing Tom Brook who scored a 36-ball century the next day in the Priestley Cup.

Woodlands were in all sorts of trouble batting first against a Hanging Heaton side who welc omed David Stiff back. They had to rely on a last wicket partnership of 41 to get to a modest 146.

The fact that they ended up winning by 16 runs was down to the unsung Tom Clee, who scored a highly disciplined 44, and a remarkably accurate spell of top-class leg break bowling by Brad Schmulian who took 5-24.

Farsley’s early season promise was extinguished by a determined Pudsey St Lawrence side who won by four wickets, Spin bowlers Archie Scott and Chris Marsden shared nine wickets in reducing Farsley to 166, while opener Mark Robertshaw was largely instrumental in his side getting there by scoring 69 not out.

Bankfoot have made a promising start to their premier career- the latest win against Batley. The six-wicket victory was earned by another stellar performance from their overseas man Zia Ul Haq Parwani who scored 55 runs and took 4-57, and a match winning 79 not out from skipper James Lee.

Leaders Methley have a home fixture against Bankfoot, while second place New Farnley are away to Batley. Both are expected to win and maintain their lead on the chasing pack.

Third place Ossett have an intriguing home match with a Bradford & Bingley side that will be out to prove the Townville thrashing was a one off.

After beating Woodlands, the previous week, they were certainly brought down to earth again, but its only early days to build up consistency.

Woodlands are in touch at the top and go to Farsley knowing that their opponents can dig deep on the day. They might have lost tamely to the Saints, but they did beat New Farnley on the second week.

Its early days, but the manner of Cleckheaton’s defeat against New Farnley will worry the Moorend supporters. It won’t be easy against Pudsey St Lawrence who beat a very good Farsley side. They then had an epic Priestley Cup win over Ossett the next day.

Hanging Heaton are still without a win and won’t relish the visit of Townville who are now tasting blood in the title race.

It looks like Jer Lane are the `real thing’ after their third victory takes them to joint top with Carlton. They brushed aside Baildon with a convincing eight-wicket win at Jenny Lane with Hashim Wajid (pictured left, 50no) and skipper Raqeeb Younis (40no) leading the way.

Carlton are looking very strong and have in overseas player Kershaski John Lewis and Farrouk Alam two huge match-winners. They both played key roles in an 89-run win over promoted East Ardsley.

Undercliffe made it three wins out of three after overcoming a good Pudsey Congs team. However, it was up to run machine Oliver Hardaker to score the bulk of the run target of 206-9, scoring 134 not out with scant support from his batting colleagues.

Congs skipper Richard Jubb scored 61 and Callum Oliver 69 for a side that will look to challenge for promotion.

Keighley had a big victory over Morley after scoring a massive 345-2 with two centurions in Noah McFadyen (142no) and Nathan Storton (104no) making hay.

For Morley, who have had a difficult start to the season, they can take heart from the performances of Sri Lankan Kavindu Kulasekara who made a battling 80, and Christian Silkstone who scored 44.

In a low scoring affair, Birstall beat Wrenthorpe after only setting a score of 113. They had Ryan Gray to thank for their victory after he had taken 7-56 to help to reduce Wrenthorpe to 88.

East Bierley must have thought they had set a decent total at 247-9, with Danny Cross (52), Jack Hebden and Matthew West (48) leading the way. However, Gomersal marched to victory in a canter- just losing the two wickets. Liam Fletcher led the way with an unbeaten 105 from 88 balls.

The match of the day this weekend in this division is at Carlton where the home side welcome Undercliffe. Carlton are scoring mightily so far this season, while Undercliffe appear to be too reliant on Ollie Hardaker.

Jer Lane are probably favourites to beat Keighley, but they will have to suppress the undoubted talents of the Australian Noah McFadyen who can deliver with bat or ball. McFadyen has scored successive centuries and looks a real find.

Pudsey Congs have an awkward looking game at Gomersal, while East Bierley need to get back on track with victory over Birstall.

Wrenthorpe have made a wretched start to the season and will look to get something from their home game against Baildon. The team from Jenny Lane are still looking for consistency but should have enough to win.

Morley need a morale boosting win and have a home fixture against neighbours East Ardsley who will probably be thinking the same.

Lightcliffe lead the way by 13-points after defeating Great Preston by seven wickets. It was that accomplished batsman Alex Stead (left) who stole the show again with 103 not out, helped by young prospect Tom Burton who scored an invaluable 62 in pursuit of 223.

Sandal are the closest challengers despite losing to Northowram Fields who were previously without a win.

Buttershaw St Paul's are third despite being defeated by Bowling Old Lane. Amer Ayoub's unbeaten 98 was largely responsible for St Paul’s final total being in excess of 200. But Farhan Hussain (91) and Hazrat Abbas (33no) saw Bowling Old Lane home.

Hartshead Moor had a welcome win last week against Hopton Mills, largely thanks to skipper Chris Wynd’s sparkling 117 not out

Crossflatt’s reliable opener Josh Brooksbank guided his side to a four-wicket victory over Hunslet Nelson with a match defining innings of 67 not out.

Yeadon have early season inconsistency problems and were beaten by a Wakefield St Michael’s side by seven-wickets. Bradley Wood (76), Ashley Hale (56no) and Conor Andrews (6-48) were the architects of the win. For Yeadon, the consistent Gareth Lee (60) had little support except for Jonathan Bell (39).

St Michael’s face league leaders Lightcliffe this week, and they will have to find a way to get the consistent Alex Stead out.

Second place Sandal will be looking to claw back the 13-point deficit on Lightcliffe when they tackle Bowling Old Land.

Great Preston are in touch with the promotion pack and will hope to beat the bottom side Hunslet Nelson.

Northowram Fields are now flying after their impressive win against Sandal and will be stern opposition for Hopton Mills.

Adwalton are still enjoying life at the top after a 205-run success over Rodley. Matty Waller continued his hot streak with the bat scoring 114, while Tom Davidson (6-22) ensured Rodley would get nowhere near.

Scholes are following Adwalton closely after a routine win at Busy Lane where they beat Windhill & Daisy Hill by seven wickets. Adam Greenwood made an unbeaten 60 to ease Scholes past the home team’s score of 151-8.

Liversedge are challenging in third place and were much too good for Brighouse. Parvaise Khan took 7-35 on his return to Russell Way, while overseas man Byron Nicholls scored 53.

The top three are drawing away from the rest with Heckmondwike & Carlinghow the next in line 12-points behind third place.

They made no mistake against struggling Spen Victoria, winning by six-wickets in a good all-round performance illustrated by Owais Hussain who hit 57, Muhammad Shahnawaz who took 5-31 and Chris Allen (3-33).

Altofts are very much in the promotion reckoning with their strong squad of players, but they struggled to beat Gildersome & Farnley Hill. Saif Tahir was the hero in the two-wicket win, top scoring with 34, and crucially taking 4-55. Gethin Clarke (37no) and Chris Harris (34) both got out when set for Gildersome in a score of 185.

East Leeds scored 299-8 in their 48-run win against Crossbank Methodists with Zahid Tarvas (93) and James Watling (68no) playing rousing knocks.

Crossbank were not daunted by such a target and made a plucky reply with Asif Sheraz (79) and Jawad Khaliq (67) batting well.

No doubt that the match of the day will be at New Popplewell Lane where the top two meet in a winner takes all game. Scholes are two points behind leaders Adwalton, and both will want to put a marker on the season.

Altofts have a chance to prove they are contenders when they entertain third place Liversedge, while Heckmondwike & Carlinghow could get amongst the chasing pack if they take care of Crossbank Methodists.