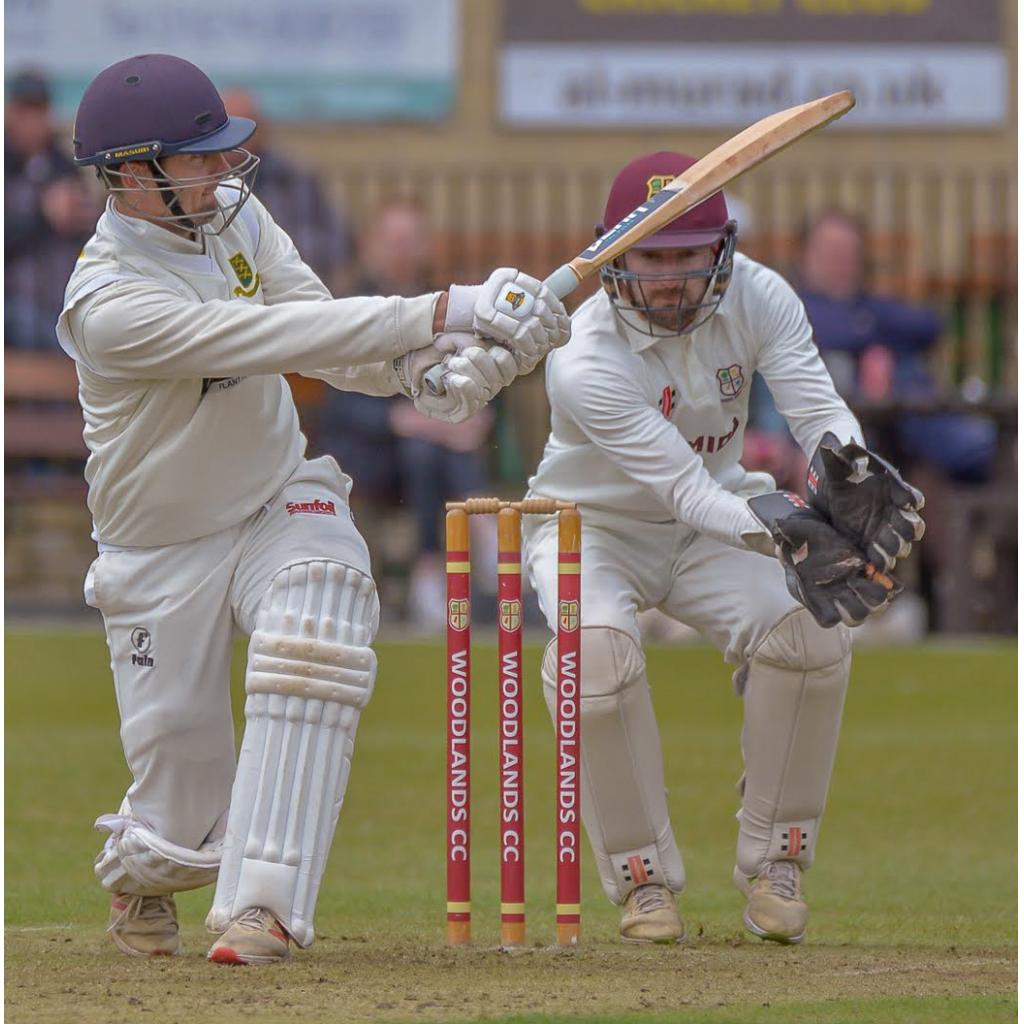 With the first half of the Premier Division season completed, New Farnley have seized the initiative at the top and lead by 26 points.

They played like true champions in their destruction of Bradford & Bingley last week, while their closest rivals Woodlands slumped to defeat at home to Ossett.

Pudsey St Lawrence are having a fine transition season with their young side and are third, albeit a distant 34-points behind New Farnley.

Batley’s comprehensive victory over their relegation rivals Cleckheaton has given them great belief in avoiding the drop, and in doing so have put the Moorenders in further trouble.

It is now developing into a three-horse race to avoid relegation with Cleckheaton (73pts) at the bottom, and Batley (85pts) and Bankfoot (93pts) also in a perilous position.

Leaders New Farnley have a tricky match at Bennett Lane, where Hanging Heaton have a formidable reinforcement in Sri Lankan Sasith Manurang.

Woodlands have a tough away match with Townville who have surprisingly lost five matches in the first half of the season to effectively exit the title race. However, these are fierce rivals with not a cigarette paper between them in recent times.

Bradford & Bingley and Pudsey St Lawrence have a clutch of promising young players on display at Wagon Lane in a match that could go either way.

After beating Farsley and Cleckheaton in their last two matches, Batley will not be fazed going to Ossett, but it is still a stiff task for them.

Cleckheaton will be fully aware of Methley’s prolific batting side when they welcome them to Moorend in another crucial game for Mally Nicholson’s side.

James Lee’s Bankfoot are gaining a reputation as plucky fighters, and they will need to display some of this at Red Lane when they take on Farsley.

New Farnley overwhelmed Bradford & Bingley by 194 runs at Wagon Lane.  Lee Goddard (118), Aidan Langley (88) and Steve Bullen (55no) were the major run-getters in a total of 351-6. Bingley’s Yasir Abbas proved again what an under-rated all rounder he is by scoring a fighting 61.

Ossett continued their fine debut season in the Premier League by shocking Woodlands. The defending champions made 251-8, but it should have been more after Brad Schmulian (67) and Sam Frankland (66) had laid a good foundation.

Ossett reached the DLS target of 236 in 46 overs with six balls to spare after Nick Connolly had anchored the innings with 59. However, the crucial innings that accelerated the scoring was from Sajith Warnakulasuriya who hit 49 from 22 balls, and Paul Malone who dashed to 70 from 49 balls.

Batley defeated Cleckheaton by eight-wickets, and the ease of the victory must have sent shockwaves all over Moorend. Unbeaten centuries from overseas man Raza Hassan (102no) and Kasir Maroof (104no) raced Batley to victory. The only consolation for Cleck was maximum batting points thanks to Iain Wardlaw’s late flurry of 57 runs from 26 balls.

Pudsey St Lawrence beat Townville by 151-runs, giving further evidence of their emerging young side. An opening stand of 118 between Mark Robertshaw (66) and Charlie Best (56) gave the foundations to build a score of 262-4. Archie Scott had a good all round game scoring 53 not out and taking 3-40 with his accurate off spin.

For Townville, who are weakened by Conor Harvey’s injury that precludes him from bowling, Harry Clewett showed some fight with 59.

Hanging Heaton crucially beat Bankfoot to ease their relegation fears and keep their opponents in the drop zone.

Opener Nick Lindley, who is having a fine season, anchored the innings well with 65. This did the groundwork for his side reaching 231-9.

Methley’s prolific early batters again excelled with Jason Marshall (62), Alex Cree (55) and Jordan Laban (79) leading the way to a score of 285-6. Yorkshire wicketkeeper Harry Duke (53) could not save Farsley from a 114-run defeat with spinner Cameron Sharp (4-50) the most successful Methley bowler.

Much of the interest in this week’s fixtures is whether Jer Lane can preserve their perfect record of taking 20 points from every match in the first half of the season.

Jer Lane are runaway leaders and the main topic of conversation in this division is who is going to finish second.

Undercliffe held the advantage in this respect before last week’s matches but slipped badly against Keighley.

Carlton have regained second place, but there are close challengers below them in Carlton (163pts), Pudsey Congs (157pts), Undercliffe (147pts) and Birstall (144pts).

Wrenthorpe are at the bottom with 39 points, and there are three clubs in the nervous nineties mingling in the relegation zone are Morley (90pts), East Ardsley (94pts) and Baildon (98pts).

Carlton appear to have recovered from their East Bierley defeat and will be odds on to prevail at home to Baildon, However, Baildon have played some good cricket in recent weeks, but appear to often lose at the death.

Undercliffe need to beat East Ardsley to get back on track, but they will find that their opponents they will not go down without a fight.

Pudsey Congs are now handily placed in third but have a match on their hands against Undercliffe’s conquerors of last week, Keighley.

In a crucial game that could affect the top and the bottom, Morley entertains Birstall, with both sides anxious for the win for completely different reasons.

Gomersal are now seventh in the table and have a golden opportunity to advance further with a home game with Wrenthorpe.

Jer Lane will be going all out for another 20 points against East Bierley, and few will bet against it.

Jer Lane wracked up another huge score with 375-6 against Wrenthorpe- the usual suspects Deron Greaves (127), Abubakar Dawood (84) and Raqeeb Younis (54) were the main scorers. Spinner Mohammad Jamal (5-64) ensured that Wrenthorpe would get nowhere near, going down by 210 runs.

Undercliffe recorded a disappointing score of 124 against Keighley, who unceremoniously polished it off by seven wickets. Byron Boshoff (43) and Oliver Hardaker (34) got starts for the Intake Road club but couldn’t capitalise.

Keighley cruised to victory with Simon Bailey (41no) and Nathan Storton (31no) showing the way with the bat, and leg spinner James Massheder (4-25) with the ball..

Pudsey Congs did themselves a power of good by beating Baildon in a thriller. On the other hand, Baildon will be frustrated they keep losing close games.

Makeshift Baildon opener Dwayne Heke hit a magnificent 142, featuring six sixes and 17 fours, and just needed moderate backing from his colleagues to reach the target. However, this was lacking, and they slumped to a 12-run defeat.

Carlton reignited their challenge for second place with a comfortable eight-wicket win over fellow promotion hopefuls Birstall. Daniel Ford hit his second century of the season, in an innings containing four sixes plus 18 fours. He was helped in the run chase of 239-8 by Kershaski John Lewis (63no).

Adam Eustace led the way for Birstall with 80, but his side’s bowling lacked the necessary penetration.

East Bierley’s overseas player Nisar Ahmad is now coming to the fore with another match-winning performance of 5-42 against Morley. Earlier, Andrew Duckworth (82) and Sam Gatenby (65) had hurried the score to 236-8.

East Ardsley’s overseas player Muhammad Tariq made 53 and also took 3-42 but could not steer his side to victory against Gomersal. Lewis Edmond scored 76 not out to ease Gomersal to a five-wicket win.

It’s close at the top with Sandal (158pts), Yeadon (152pts) and Buttershaw St Paul’s (145pts) currently riding high, but Northowram Fields, Hopton Mills and Lightcliffe are all within a reasonable distance.

At the bottom end, Hartshead Moor (76pts) are in the most danger of going down, but Wakefield St Michael’s (92pts) and Crossflatts (98pts) are in a precarious position, with Hunslet Nelson and Great Preston also looking over their shoulders.

There are no top of the table clashes this week, but the Crossflatts v Wakefield St Michael's fixture is definitely the most crucial clash in the drop zone.

Hartshead Moor has a difficult game at Buttershaw St Paul's who have emerged as a real threat at the top.

Form team Yeadon should be too strong for Great Preston, while leaders Sandal have a good opportunity to extend their lead with a home match with Hunslet Nelson.

Lightcliffe will need a positive result at Hopton Mills to get back in the promotion hunt. Northowram Fields had a setback losing to Yeadon and will be tested at Bowling Old Lane.

Yeadon had a significant win last week when they beat Northowram Fields by seven-wickets. An unbroken fourth wicket partnership of 105 between Gulsheraz Ahmed (97no) and Seth Pickering (33no) was the telling factor, after Adeel Ashraf (6-69) had restricted their rivals to 212-9. Farhan Hussain (56) and Ben Grech (52) were the top scorers for Fields.

Sandal’s greater experience tipped the balance in their favour in the two-wicket win over fellow promotion hopefuls Lightcliffe. Sam Noden was probably the man of the match for Sandal with 43 priceless runs to go with his 4-57.

Jonathan Whiteoak was Lightcliffe’s best player when he revived his team’s batting with 49 not out before taking 4-73 to give them a late fighting chance.

Chalker hit his second century of the season, helping himself to two sixes and 20 fours, and giving his side a real chance of victory until his dismissal. He will obviously be a key figure in future weeks in his side’s attempts to stave off relegation.

Hopton Mills had an impressive 170-run win over relegation threatened Wakefield St Michael’s. Usman Maqsood (5-26) and Umar Abbas (4-40) bowled out St Michael’s for 69 after the latter had crowned a superb all-round performance with an innings of 50. This has taken Mills to the fringes of the promotion race.

Crossflatts are back with a bang after comfortably beating Great Preston by six-wickets. A second wicket stand of 128 between South African Ruan Van Rooyan (79) and opener Josh Brooksbank (68no) was the decisive factor, while Great Preston’s consistent batter James Conlon (53) offered the most resistance in his side’s defeat.

Bowling Old Lane showed no mercy for bottom club Hartshead Moor inflicting a seven-wicket defeat on them.  Overseas player Hazrat Abbas produced a devastating spell of 8-24 as Old Lane bowled them out for 118. He was not finished there as he made 46 with the bat.

Liversedge have surged ahead at the top and now enjoy a 40-point lead on second place Adwalton. There are now only six points between Adwalton and fourth place Spen Victoria. But the most significant move is Scholes moving into third place two points behind Adwalton.

Adwalton will hope to reinforce their second position but that may not be easy against an improving Spen Victoria side.
Scholes will be hoping they can shake off the challenge of inconsistent Altofts to keep the pressure on Adwalton.
have a good chance of keeping the pressure on when they face Rodley.

Leaders Liversedge are away to East leeds while there is a key game at the bottom with Rodley taking on Crossbank Methodists.

The big match last week went the way of leaders Liversedge who beat Adwalton with some ease by eight wickets. Parvaise Khan (4-23) was largely responsible for reducing Adwalton to 106.

Scholes continue to edge closer to a promotion place after their nine-wicket destruction of Crossbank Methodists. Mahleb Mahmood (5-34) was the destroyer in chief.

Spen Victoria’s surge up the table was further helped by a comfortable four-wicket win over Rodley. Bilal Ejaz (79), Ayyaz Ali (55no) and Amjad Tariq (48no) enabled them to overhaul Rodley’s decent score of 239-6.

Rodley can take heart from the battling performances of Bailey Wilson (5-51 & 48).and Robert Young (58).

Windhill & Daisy Hill proved they are on the charge after an impressive 98-run win over Heckmondwike & Carlinghow. Ahsan Tanveer (96), Shoaib Iqbal (58) and veteran Maz Bhatti (5-26) were the stars.

Altofts had Craig Wood to thank for a great all-round performance that shattered Brighouse. After taking 4-34 he struck 62 to help to ease his side to a routine win.