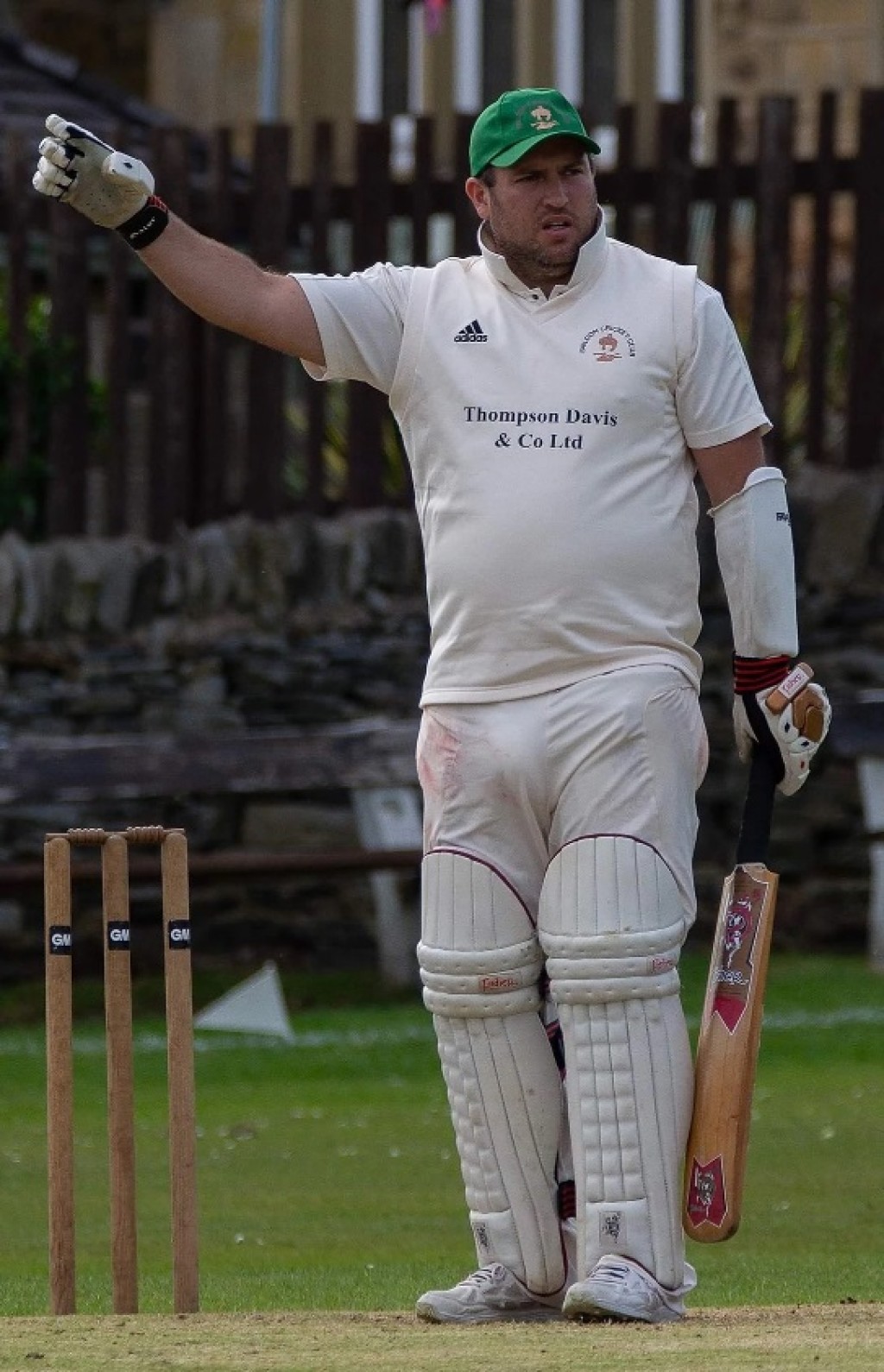 The line up for this year’s Gordon Rigg T20 Group A Cup semi-finals has been confirmed after an evening which saw four players score centuries.

Baildon skipper Dwayne Heke, pictured top, made the highest individual score of the night with 140 not out in their win over Keighley.

The other century makers were Ryan Cooper (132no) for Farsley in their 90-run victory at Pudsey St Lawrence, Christian Silkstone who made 102no for Morley in their win against Birstall and Paul Quinlan scored 102 in Keighley’s defeat by Baildon.

Another outstanding batting performance came from Woodlands’ all-rounder Muhammad Bilal who reached 50 from just 15 balls in the 10-wicket win over East Bierley which confirmed his side as Pool Two winners.

East Bierley’s hopes of making the semi-finals were effectively shattered when they were reduced to 15-4. They had no answer to the bowling of Brad Schmulian (4-3) as they were bowled out for 71 in just 14.5 overs.

Woodlands romped to a 10-wicket victory in just five overs with Bilal hitting six sixes and six fours in an unbeaten 62.

Bankfoot finished second in Pool Two after winnng a rain affected game with New Farnley by four runs on a comparison of scores after 11 overs.

There was little hint of bad weather when Bankfoot batted first after winning the toss.Hisan Ahmad continued his good form with 49 as his side scored 121-7. Leg spinner Jack Dyson took 3-18 for New Farnley.

Despite the rain couds moving in, New Farnley made a slow start to their innings. They were 50-2 after 10 overs when rain sent the players scurrying from the field. When they returned, New Farnley had one over to score 15 runs to win  which they failed to do.

Bradford & Bingley confirmed their place in the last four with a six-wicket win over the 2019 winners Undercliffe in Pool One.

The Undercliffe skipper Scott Etherington made 44 but lacked support as his side were bowled out for 101. Ed Brown (3-17) and Yasir Abbas (3-21) were the chief wicket takers for Bradford & Bingley.

There were plenty of runs in the clash between Baildon and Keighley. Heke set the tone with 140 no as Baildon scored 237-5. He was joined in a third wicket stand of 102 with Simon Bailey (43) while Luke Chapman took 3-38 for Keighley.

The in-form Quinlan hit his second century in four days for Keighley. He struck six sixes and 11 fours as he dominated his side’s reply of 173-8 with 102. Will Kelly took 4-18 as Baildon wrapped up a 64-run win.

Pudsey Congs, who were sitting out the final round of fixtures, had their semi-final spot settled when Birstall suffered a 24-run defeat at Morley in Group Three.

The home side were boosted by an unbeaten 102 from Christian Silkstone which helped them to make 155-2. Silkstone hit two sixes and 12 fours in a 74-ball knock. Morley used eight different bowlers as they restricted Birstall to 131-8.

Ryan Cooper was in blistering form for Farsley. He smashed nine sixes and 12 fours while making an unbeaten 132 from 69 balls as he dominated his side’s score of 201-2.

The home side could only make 111 in reply as Adam Ahmed (4-20) and Mark Harrison (3-32) struck for Farsley. The result left Pudsey St Lawrence bottom of the pool.

Big-hitting David Stiff, a hero of so many Hanging Heaton T20 triumphs, was at his best in the 46-run win over Carlton which ensured they finished top of Pool Four.

Stiff hammered six sixes and three fours while making 61 in his side’s total of 180-7 which included 32 from opener Gary Fellows.

Carlton were dismissed for 134 with Farrouk Alam (39) and Daniel Ford (32) providing the main contributions as left-arm spinner Callum Bethel picked up 4-12.

Townville secured second place in the Poolwith a nine-run win at methley in their final game. Alex Page turned out to be their  key performer scoring 47 and taking 3-23.

Townville made 165-7 with Conor Harvey (31) providing the main support to Page, while Robert Clegg (4-44) was the pick of the Methley bowlers.

Opener Gharib Nawaz led the Methley response with a fine knock of 97 and he was joined in a first-wicket stand of 188 by Alex Cree (45).

When Cree was dismissed, Methley needed18 from 14 balls but it was a target they fell short of. Twelve runs were needed from the final over and after Page dismissed Nawaz and Rob Withers with successive balls, Methley lost their way and finished on 156-3.

In the Group B Cup last year’s beaten finalists Sandal have taken over at the top of Pool One after bagging a maximum 20 points from a 33-run win over Altofts.

Sandal’s win enabled them to capitalise on previous leaders Great Preston’s five-wicket defeat by Hunslet Nelson. Sam Thewlis took 3-16 as Great Preston were restricted to 120-9. Andrew McIntosh (48no) and Jamal Khojani (36) helped Nelson to win with two balls to spare.

East Ardsley boosted their hopes of qualification for the semi-finals with a 44-run win over Gildersome & Farnley Hill on a comparison of scores after rain curtailed the visitors' innings.

Jonathan McGregor smashed 10 sixes and seven fours while making 109 not out out of East Ardsley's 209-4. He was joined in an unbroken fifth-wicket stand of 146 by Josh Wild (41no). Liam Pearson was the most successful Gildersome & Farnley Hill bowler with 4-11.