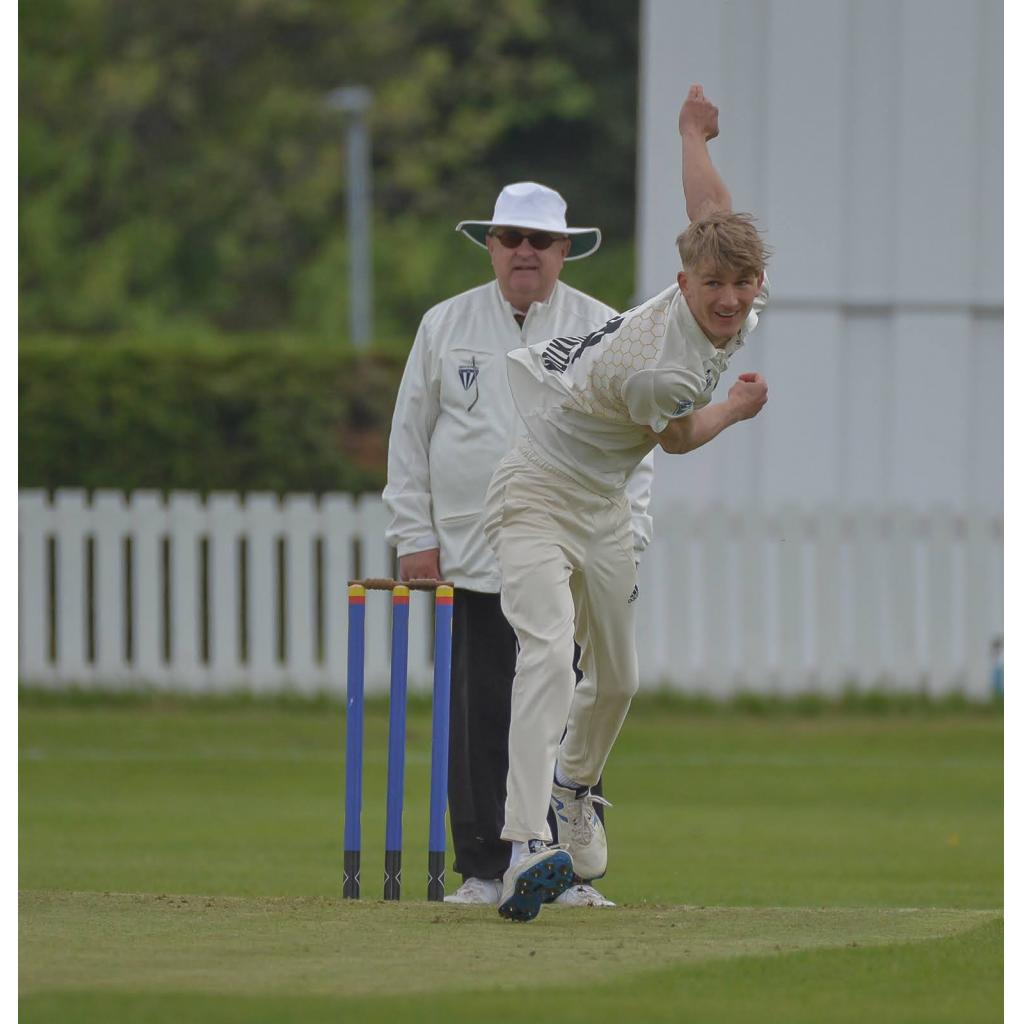 Bradford & Bingley’s teenage bowler Jack Luxton held his nerve in the final over as he helped his side secure a one-run win over Jer Lane in the Gordon Rigg T20 Group A Cup. With Jer Lane needing seven runs to overhaul the home side’s score of 138-8, Luxton only conceded five singles.

The victory was set up by Yasir Abbas who top scored with 46 and took 3-13 for Bradford & Bingley. Crucially, Abbas removed the dangerous Cosmond Walters (49) and Imran Mirza with successive deliveries in the penultimate over.

Like Abbas, Walters was also his side’s best bowler with 3-41, but even his efforts were not enough to save his side from a second successive defeat.

Bradford & Bingley are now just two points behind Pool Three leaders Woodlands with one game to go. Woodlands had a comfortable five wicket win over Bankfoot.

Baildon’s Joel Newlove made 101 from 62 balls but ended up on the losing side as the Jenny Laners suffered a 13-run defeat against Keighley. Newlove hit four sixes and 10 fours while sharing a fourth wicket stand of 120 with Simon McDermott (45) as Baildon finished on 194-5, Dillon Birkett taking the bowling honours with 3-15.

Keighley’s talented Australian Noah McFadyen (54) was backed up by Billy Whitford (36) and Ben Hemsley (31no) as their side made 207-5 after opting to bat first. Will Baker picked up 3-43 for Baildon.

Holders Hanging Heaton are the first side to be guaranteed a place in the semi-finals despite not playing. None of their rivals in Pool One can now catch them despite Townville and Carlton both registering wins.

There was a tight finish at Carlton where the home side defeated Methley by three runs. Farrouk Alam (4-25) and Jonathan Rudge (3-26) were the key bowlers as Methley were restricted to 138-8 in reply to Carlton’s 141. Opener Jason Marshall made 70 for Methley.

Alex Page (48no) and Joe Thompson (36no) ensured that Townville were able to overhaul an East Ardsley score of 132-7 to win by seven wickets. Ritchie Bresnan was the pick of the Townville attack with 3-23.

Pool Two is still wide open with joint leaders New Farnley and Morley who meet next Tuesday and Ossett all in with a chance of getting to the last four.

Morley looked to have given themselves a good chance of victory when they posted 185-7 against Ossett. Opener Liam Thomas got them off to a fast start with 50 before Sri Lankan Kavindu Kulasekara (47) and Henry Rush (36) kept the scoreboard ticking over despite the work of James Wade (3-35).

Ossett soon showed that Morley’s total was not going to worry them. Openers Matthew Race (78) and Mubtada Akhtar (53no) put on 141 for the first wicket to provide the perfect launchpad for big hitting Sajith Warnakulasuriya (41no) to put the seal on a nine-wicket win which was achieved with 22 balls to spare.

Zeeshan Khan took 4-19 as Batley dismissed Birstall for 147 to complete a 29-run win. Jaymish Patel (47) was the top scorer for Birstall.

There was a thrilling finish at Red Lane where Farsley scored 20 runs from the final over against Undercliffe to tie the scores. But Farsley’s delight at seeing Mohammad Atif hit the final ball of the game for six was tempered when they discovered they had lost the match by virtue of having lost one more wicket than their opponents.

Farsley finished on 170-6 with Ryan Cooper (36) top scoring as Zeeshan Qasim picked up 3-34. Skipper Bailey Worcester (52no) and South African Byron Boshoff (34) led the way as Undercliffe made 170-5.

Undercliffe, who won the competition in 2019, now top Pool Four but Pudsey St Lawrence remain in contention and are due to meet in the final match on July 5.

Archie Scott (40no) and Josh Priestley (37) helped St Lawrence to make 133-5 before restricting neighbours Pudsey Congs to 127-5. Sri Lankan Yohan Mendis continued his good form with 74 while Sabir Mahmood made 31 as Congs finished on 127-5 to lose by six runs.

The Group B Cup got under way with the 2020 winners Northowram Fields defeating Windhill & Daisy Hill by 79 runs in Pool One. Openers Kyle Welsh (94no) and John Lister (64) put on 129 which enabled their side to make 189-2 before dismissing their rivals for 110.

Scholes opened their challenge with a three-wicket win over Spen Victoria. Adam Greenwood (48) and Christian Jackson (45) enabled them to chase down a Spen Victoria score of 150-6 which featured an unbeaten 57 from wicketkeeper Corey Roebuck.

Hunslet Nelson made the night’s highest score of 213-6 as they defeated Adwalton by 75 runs in Pool Two. Asif Ayub (53), Australian Kurt Chalker (50) and Sam Thewlis (41) led the way for Nelson who restricted Adwalton to 138-7.

Last man Luke Slater turned out to be the match winner for Great Preston as he hit the final ball of the game from Leighton Shuttleworth (3-26) – the only delivery he faced – for six to secure a one-wicket win over the 2021 beaten finalists Sandal in Pool Three.

Sandal’s total of 151-8 featured 39 from Karl Hewitt and 32 from Matthew Westwood before he was forced to retire. Stuart Ruddick (3-21) and David Illingworth (3-26) were the pick of the bowlers for Great Preston while Michael Carroll took 3-41 for Sandal.

An unbroken third wicket stand of106 between Saif Tahir (67no) and Jabiri Mills (45no) ensured a comfortable seven-wicket win for Altofts against Wakefield St Michael’s. Craig Wood and Alfie Oliver both took 3-26 as St Michael’s were restricted to 117-9. Lalith Mangalarpu top scored with 37.