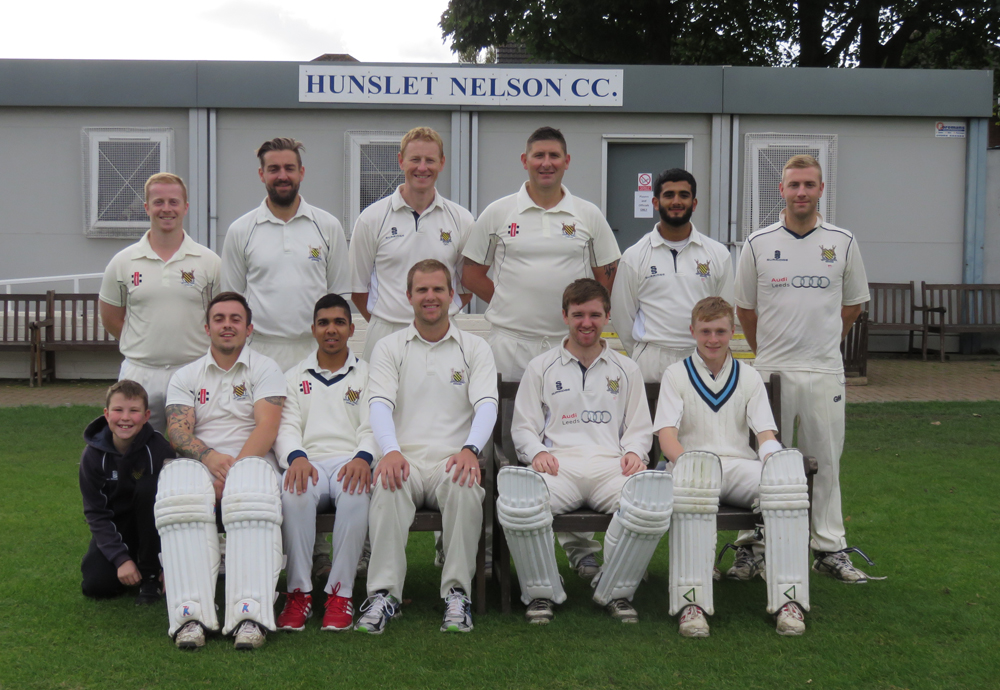 The Hunslet Nelson team that won promotion in 2017

Hunslet Nelson Cricket Club was formerly called the Albion which dates from circa 1810. The Albion changed its name in 1869 to Hunslet Nelson and played at the same ground at Low Road, Hunslet.

Like all clubs in the mid nineteenth century, Hunslet Nelson didn’t play organised league cricket. Cricket clubs at this time informally invited other clubs to arrange friendly matches via the local daily newspapers.

Hunslet Nelson was no exception, and was one of over thirty cricket clubs in the South Leeds area playing friendly cricket.  Amazingly it’s now the last remaining cricket club in the area of South Leeds!

Early league cricket in the Leeds area proved to be a tangled web for the club and they went from league to league. Initially they took part in the Leeds Second Class League and their reign was from 1893 until 1905.

In 1906 Hunslet Nelson joined the more prestigious Leeds and District Cricket League and spent a 29-year spell there until 1935. Thereafter there was a league/club rebellion that led to the creation of the Leeds Central League. The club took part in this new venture in 1936, but just lasted three years before returning to the Leeds and District Cricket League in 1939.

The club found cricket stability in this league and participated until 1964. However, in 1965 Hunslet Nelson took a major step forward when joining the Central Yorkshire Cricket League.  This league covered a wider spectrum and was considered to be one of the three senior leagues in West Yorkshire.

Success in the Central Yorkshire League

It was a triumphant first season as Hunslet Nelson won the Division Two title in 1965 under the captaincy of A Westerman. But, it proved to be a real struggle to keep their top flight status and relegation soon came knocking.

Encouragingly, they returned as Division Two title winners in 1969 and in doing so ensured silverware for the second time in four years. J Taffender led a team that enjoyed further glory with A Denison winning the League Batting Averages with 343 runs at 49.

Having never made a great impact on the Heavy Woollen Cup the club exceeded all expectations in 1971 by reaching the semi-final. In a real nail-biter against Ossett they set a decent score of 207-7. In reply Ossett scored steadily but with four overs remaining still needed 28 for victory.

The winning run for Ossett came off the final ball of the match, a four hit by Farrar. Hunslet Nelson, often Ossett’s bogey team, dropped seven catches, any one of which could have altered the result in their favour.

Hunslet Nelson got a taste for the Heavy Woollen Cup because they reached the semi-final again in 1972.  Again it was a close affair and again the club suffered an agonising defeat. The powerful Heckmondwike side was restricted to 161 after being odds on for 200-plus.

Hunslet made slow and dogged progress in reply, but had a realistic chance of victory at the half-way mark. Then a shutter of wickets ruined their day as they folded to 117 all-out, with nine wickets falling to catches.

The club had proved they could mix it with the big boys on their day but still found it difficult to break through as one of the leading clubs of the league and were relegated again.

Probably the highlight of the seventies was R Bebbington’s bowling feat in 1974 taking 71 wickets at 8.11. This secured him the Division Two Bowling Averages which was  a first for the club.

In the top flight

The club was back in top flight in 1983 when captain P Rix led them to the Division Two title for the third time in 18 years.

As an added bonus All Rounder Steve Lawrence had an excellent season scoring 560 runs at 43.08, and also taking 51 wickets at 10.59 with his characteristic leg breaks. This performance won him the League’s Clifford Sykes All Rounders Trophy.

In 1987 Hunslet Nelson CC relocated to the Arthur Thornton ground, Gipsy Lane, Beeston. This was regarded as a good move by all at the club, but in 1995 they moved to a purpose built home at the Oval, Hunslet.

Back in Division Two in 1997 they finished in third place two points behind Staincliffe. The best performer was R Kinder who took 58 wickets, and also scored 476 runs. A Balmforth also took 58 wickets.

After four years at the Oval the membership decided to return to Gipsy Lane, Beeston in time for season 1999. However, the club did not rest on their laurels and re-fashioned their ground so successfully they won the league’s ground award on six out of eight years.

With a dedicated and hardworking volunteer base a` three bay’ practice pitch was laid in 2005, followed by tree/bush planting round the perimeter of the ground in 2006. This was followed by improved changing rooms and toilets for two teams.

Hunslet Nelson was one of nine cricket clubs throughout England and Wales to pilot the Chance to Shine project in 2005. In the same year the club achieved ECB Focus Club status.

In 2008 two new buildings were constructed, a digital scorebox and tea room which also provided toilet facilities. After that, in 2009 a patio was constructed in front of the changing rooms and tea room, and the following year saw the addition of a purpose built car park, and hard standing and paving areas.

The best batsman at the club in 2009 was Daniel Calverley who won the batting averages with 483 runs at 32.20 followed by the consistent Tommy Roy who scored 499 runs.

In 2010, Hunslet Nelson had won the Division One title (former Division Two) with an incredible nineteen wins. It was based on a team of individual achievers led by captain Thomas Roy who set the example, winning the Division One Batting Averages with 815 runs at 58.21 with a top score of 118*.

The bowling was penetrative with opening bowler Sohail Raz, above, winning the Division One Bowling Averages after taking 45 wickets at 9.84, with a best analysis of 6-8. Derek Hammill was just behind him in second place with 44 wickets at 11.02.

To complete the full set of individual honours that year Joe Smith won the Division 1 Wicketkeepers Trophy with 25 victims.

Still led by Roy, they nicely consolidated their new Premier League status in 2011 with ten wins. Roy was again the chief run-getter with 663 runs, while Raz again had an effective season with the ball taking 38 wickets.

Riding high in the Premier League

Hunslet Nelson was now riding high in the Premier League and in 2012 recorded twelve wins. Seamer Michael Lambert was the major influence finishing fourth in the League Bowling Averages with 56 wickets at 13.64.

In 2013 Lambert took a further 46 wickets, assisted by his opening partner Derek Hammill who took 38. With Roy carrying the batting responsibilities again with 480 runs the club were entrenched in mid-table.

It was a different matter in 2014 when only the re-organisation of the league to accommodate the Scholes departure to the Bradford League saved them from relegation. An 18-year old South African Jean Strydom, above, who had been making the grade for Western Province, was the best performer with 592 runs at 42.29.

What turned out to be the last season in the Central Yorkshire League ended with a lowly position after a tally of just four league wins. The salvation of the season came in the form of 24 year old South African All Rounder Warren Ekstraal.

He came to the fore with the ball taking 51 wickets at 13.69, and also scored 361 runs. After an early struggle in the season the club looked to Ekstraal, above, who hit 82 and claimed 4-15 in their first Premiership win at Carlton. However, he was often battling on a lone front, illustrated by the one-wicket defeat against Batley, when he scored 35 with the bat, and took 6 wickets for 42 runs.

Into the Bradford League

During 2015, plans were afoot to absorb the Central Yorkshire League clubs into the new Bradford Premier League set-up. In consequence, Hunslet Nelson’s lowly position had no bearing on their Championship status for the 2016 season.

Hunslet Nelson were wafer-thin on batting strength for 2016 with only Australian batsman Christopher Anderson able to get past 200 league runs. Anderson, who played Premier League 2XI cricket for Richmond, scored 623 runs at 38.94.

The club recorded seven league wins and missed out on a Championship One slot for 2017. The best bowler was 16 year-old left-arm spin bowler Max Chappel who took 30 wickets, and also received recognition playing for Yorkshire U19s.

Skipper Will Stiff engendered a good team spirit in 2017, resulting in promotion from Championship One.  Without stars and concentrating on a team ethic, they were on the fringes of the promotion race for much of the season. Towards the end of the season they were going` toe to toe’ with Altofts with nothing between them.

In the penultimate fixtures Hunslet Nelson stole a march on Altofts by defeating Hopton Mills, while their rivals were frustrated by their abandoned match at Liversedge. Hunslet Nelson defied the weather by setting Hopton Mills a challenging 155 in 33.1 overs, and then bowled them out for 96 to win by 59 runs. Skipper Will Self led by example scoring a vital 31 runs, and also taking 3-14, while Andrew McIntosh top scored with 47 runs. Glen Thompson had the best bowling figures of 4-7.

The following week Hunslet Nelson confirmed promotion by beating Northowram Fields while Altofts were defeated by Buttershaw St Paul's. The 24 point margin on third place gave a misleading slant on what was a closely run promotion race.

The best league performers were McIntosh (488 runs), Jack Scanlon (435 runs) and Stiff who scored 308 runs and captured 19 wickets. Patrick Hinchcliffe was the most prolific wicket-taker with 27.

The club had a run to the Jack Hampshire Cup Semi-Finals where Hartshead Moor proved too strong for them. They started the competition with a bang scoring 314-8 against Adwalton, before beating Crossbank Methodists and Azaad.

In the higher division the club struggled to put consistent results together, but could consider themselves unlucky to go down, given the fact that they had won three more matches than the side immediately above them who survived.

Lacking real star quality, but possessing a team ethic, they competed most weeks led by the competitive Stiff. Entering the last game of the season they had to win at third place Morley to survive, and Stiff gave them every opportunity. He helped to bowl Morley out for 201 with an analysis of 4-56, and then doggedly fought with the tail ending unbeaten on 37, as his team fell 39-runs short.

Young spinner Dan Cross impressed with 42 wickets, while Mark Murphy and Stiff made invaluable all- round contributions.

The club celebrated their 150th anniversary in 2019 with a great deal of zest, but couldn’t honour this year with a promotion push.

They began brightly, but four successive defeats from June 29th negated any prospect of a challenge. McIntosh was the most consistent batsman, while Cross again took the eye with the ball.

When Covid-19 struck in 2020, Hunslet Nelson took part in the Gordon Rigg Division Two League Cup, winning one match out of eight in the East Section.

The seven league wins gained in 2021 was only sufficient to take them to tenth place. They did flirt with relegation issues at one point, but the three successive wins in July kept them relatively safe.

Andrew McIntosh and Alastair Finn were the stand out players.